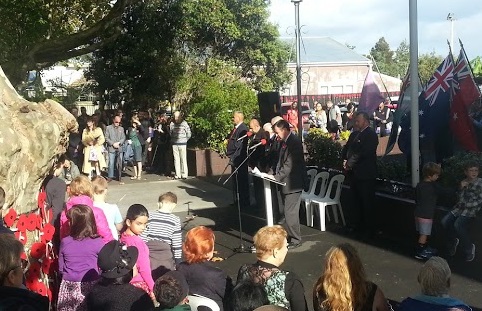 I am honoured once again to stand before the centennial commemoration mural this year to address you on behalf of your Waitemata Local Board of Auckland Council. Deputy Chair Pippa Coom, member Deborah Yates and I are here to support the Grey Lynn Returned Services Club, veterans and local residents as we remind ourselves to a new generation how important peace, independence, fairness and 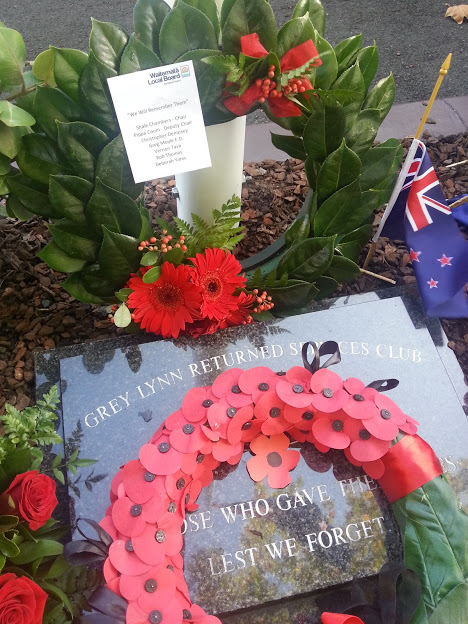 freedom is to our communities in Auckland, and the price we have in the past paid in war for that.

Today at over 70 parades and services across Auckland we reflect on and recognize the sacrifice, courage and unselfish devotion of those men and women who served their country in war, in the pursuit of what they believed, on many occasions at the cost to their lives.

This day 101 years ago the Gallipoli landings took place at dawn when the first of more than 16,000 New Zealand soldiers to serve with Australians on Gallipoli landed on the ANZAC Cove beaches and the ANZAC legend began.
Since gathering last year for the centenary of the Gallipoli campaign, the campaign has been fought and lost 100 years ago, and in 1916 our New Zealand Expeditionary Force, this time including my grandfather, is about to be sent to battle the Germans and mud in the fields of France and Flanders on the Western Front at epic battles in Ypres, the Somme, and Passchendaele.

Gallipoli is now remembered in its sacred sites:  Anzac Cove, Lone Pine, Shrapnel Valley and Chunuk Bair, where our soldiers were buried where they fell. Today the place with its gentle lapping of the waves on the shore is very different to 101 years ago, and is ablaze with irises, pink flowering Judas trees, the purple flowers of wild thyme and hedges of rosemary.

Anzac Day has become central to New Zealand and Australia’s national identity and cultural heritage, despite being a military failure. Because it was from here we began to think of ourselves as not just servants of the British Empire, but as distinct national entities. Thus, out of catastrophe, each of our nations emerged with a sense of certainty about our own destiny and our place in the world.

One such ANZAC to survive the living hell that was the slaughter, and stench of death from the shells, machine guns and the snipers, and play a key part in the Gallipoli campaign’s singular short-lived achievement of capturing and hold the heights of Chunuk Bair was Corporal Cyril Bassett, VC.

Cyril was my grandfather, Eric Chambers’ life-long best mate; they were both Auckland boaties together before the war, joined the Signals Engineers of the New Zealand Expeditionary Force, although my grandfather a little after Cyril, and both later fought together on the Western Front at Ypres and the Somme.

Cyril however was first involved in action with his Auckland boating partner and friend, Cecil Whitaker in the battle for Chunuk Bair at Gallipoli, as they together laid and re-laid telephone wire day and night out in the open on the bullet and shrapnel-swept hillsides to maintain communications under fire to the front.

For his heroism under fire, Cyril received the Victoria Cross; the first awarded to a New Zealand serviceman in the First World War.

He was a modest man, and later said his award was representative for the bravery of his companions on Chunuk Bair. He said “I got the Victoria Cross, but my mates just got wooden crosses.

His 22-year old friend Cecil was not so lucky. Badly wounded on Chunuk Bair he later died, and got a weighted canvass bag and a watery grave in the Aegean Sea.

Cyril, like my grandfather, didn’t speak much of the war. But he did speak of his mates. Cyril and my grandfather were two of the legion of war-weary and damaged men who got their heads straight again through yaching after the war. Cyril spoke for his mate, my grandfather’s family at my parents wedding.

100 years ago today, the first ANZAC day commemorations began both as a means of rallying support for the war effort and a public expression of grief – for no bodies were brought home. In 1916, thousands lined Queen Street to view a procession of about 300 soldiers who had been discharged due to injury or illness. The procession ended at the Town Hall where the soldiers reunited with former comrades, and where a public service was held, followed by a diner and concert.

We do not and must not glorify war, but it is important we remember we have peace and freedom here because of the actions of those who lived in communities like ours, but who went and fought in wars for that freedom over the last more than one hundred years.

We have no military class. Veterans of the past were ordinary people – so farmers, miners, clerks, and builders. Some fought on the high seas, some battled in the jungle, and some in the skies. All contributed to the spirit and character of our nation.

Our ANZACs and all who have served our country will be held in our hearts and minds forever. We do remember them.