A special screening of the brilliant political film Campaign 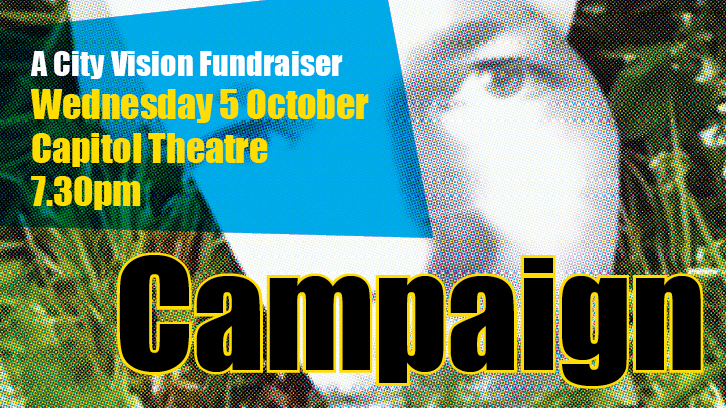 Almost 20 years ago, New Zealand held its first MMP election.  As we countdown the final days of the Local Elections 2016 it is a significant anniversary to mark with the screening of a remarkable political film that chronicles the new MMP dawn.
Join us this Wednesday 5 October on the final day to post voting documents (votes can be hand delivered up until midday 8 October at local libraries).
In celebration of the 20th Anniversary of the first MMP election a special screening of the brilliant fly on the wall documentary film
CAMPAIGN
Directed by Tony Sutorius

Place: Capitol Cinema, 610 Dominion Road
Time: 7.30pm
Tickets:  $20 (recommended minimum) please considering donating as much as you can per ticket
Pay by direct credit to our bank account
Kiwibank account number 38 9007 0461177 00   Particulars: Number of tickets (or state Donation if you are not able to attend but would like to make a donation to City Vision) Reference: Your name
To confirm your ticket please then email CityVision.org.nz@gmail.com
Door sales available but please email in advance to reserve your ticket
A City Vision Fundraiser to elect progressive candidates to Auckland Council
Bring cash for the raffle in the best tradition of political fundraisers
More about the film
In 1996 Tony Sutorius got his hands on a new digital video camera, days before the start of an election campaign in Wellington Central. Made on the proverbial shoestring, this feature-length documentary chronicles five of those battling for the crown as a new political age — MMP — dawns. Richard Prebble joins a new party called Act, the National candidate joins United New Zealand… and one of the five will be sacrificed by their own party. Sutorius sat through 55 hours of footage to forge the result, which won enthused, sellout audiences at the 1999 NZ Film Festival