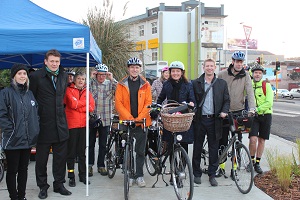 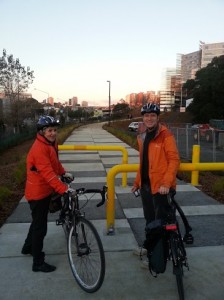 Stage one of the Grafton Gully cycleway was opened this morning by NZTA.

It’s only 300m long, but I attended the opening of what will become part of the 1.9k Grafton Gully Cycleway (funded and built by NZTA). I was running late so rode up the cycleway (being first to do so!) and then rode back down with a great bunch of cyclists including Richard Barter and Pippa Coom.

Stage two on Churchill street is currently under construction. Stage three should start in October providing a continuous connection from Beach Road to Upper Queen Street and the NW Cycleway.

Christopher Dempsey, City Vision member on the Waitemata Local Board