A progressive transport agenda for Auckland 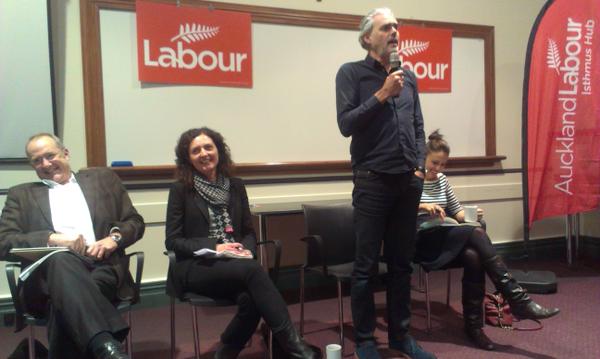 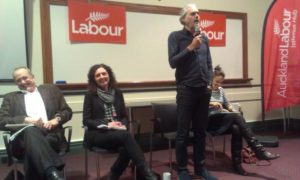 On 23 May I took part in a panel discussion with Patrick Reynolds (Transport Blog contributor) and Phil Twyford MP (Labour’s Transport spokesperson) on the future of transport in Auckland.

The event was organised by the Auckland Labour Isthmus Hub and MC’ed by Labour MP Jacinda Ardern.

We were asked to start the discussion by each presenting our thoughts on what a progressive agenda for Auckland’s Transport should look like, and what we need to get there.

Thank you to Auckland  Labour Isthmus Hub for organising this evenings event and for the invitation to take part on the panel.

I’d like to bring a local board member perspective to the discussion.

When I started out as transport advocate about 7 years ago one of the first politicians I met said to me that no one will ever cycle in Auckland because it is too hilly and it rains too much.

That same politician is now “leader of the opposition” on the Waitemata Local Board.  And he is now very much in the minority as what I would call a “mono-modal-list”. Of 7 members on the Board  5 are truly multi-modal – users of PT and active transport.

This is by way of introduction to bring me to a few comments I would like to make about what I think is a progressive transport agenda, how that is starting to be embraced in Auckland but what is needed to actually get there. I think a positive transformation has been happening not just with the make up of elected reps (on Waiheke I hear board members are 100% e-bike users!) but in Auckland’s transport usage & attitudes.

Where Aucklanders have been provided choice they are showing they are not DNA programmed to just drive cars (as we’ve been led to believe) and they are also saying they want options. For example:

So when I think of a  progressive transport agenda it is definitely about PT and active transport and the Government getting seriously on board with funding (key elements that Patrick and Phil highlighted in their opening remarks).

But I think a progressive agenda goes much further so that kids can actually retake the streets. Walkable communities, slower speeds, the re-prioritisation of road space, accessible mobility, changes to the give way rules to favour pedestrians,  NYC- style “vision zero” where we don’t accept any fatalities as “normal” and a “complete” street design approach every time so streets are usable by all ages and abilities regardless of the mode of transport.

I am backing this kind of progressive transport agenda because of the environmental, social, economic and health benefits it will unleash (and the promise of a happy city as we’ve heard about at the recent Auckland Conversations! )

Of course I’m presuming everyone here knows the theory and have heard the successes from places like NYC, Portland, London, Copenhagen, Melbourne that have adopted truly “progressive” agendas . [But then I could be wrong you could be all  thinking progressive means self driving transport pods and monorails! ].

I think we’ve started to make some significant steps in Auckland towards a progressive transport agenda – and not just in the city centre.

We definitely still have a long way to go.  It has been over 4 years of frustratingly hard work getting Auckland Transport’s agenda to align with local priorities and for AT to  stop building business as usual crap.    I think the ship is turning but delivery and leadership is still a big issue. And it doesn’t help that central government is clearly calling the shots in the background.

But no amount of government funding or alignment is going to help us achieve a progressive agenda if we haven’t brought the community along with us.  And I think this is one aspect of what we need to get there.

I think Aucklanders over all want the big picture of a world class PT  [ that Patrick/Phil describes] but just not the progressive package if it means the removal of parking on their street, speed bumps, speed cameras on their route to work  or an apartment block next door.  To give one example. Auckland Transport is trying to implement a complete street design for Franklin Road – everything can be catered for including parking but the residents don’t want it because of concerns about the dangers of leaf fall and the safety of  cyclelanes.

We have some ways to go before we are YIMBIES for a progressive transport agenda in our neighbourhood.  But I do take comfort from what Janette Sadik-Khan (former Commissioner of Transport for NYC) said on her visit here that people are actually ahead of the politicians and press. She said what worked in NYC was lots of public consultation and lots of data.

To conclude: we need to know what a progressive agenda looks like (One indicator I have given for being able to recognise what this is is when we see kids playing in the streets); the community has to buy it;   Central government has to come to the party with funding and alignment; but we have to ensure a strong progressive Council – Mayor, Councillors and Local Board members – is elected next year to continue the work that has been started over the last 5 years and is committed to delivering on the ground.

After the panelists spoke a lively discussed followed with questions from the floor.

[Note: City vision is a coalition of Labour, Green and community independents. I do not belong to a political party. The views expressed are my own and not City Vision policy]