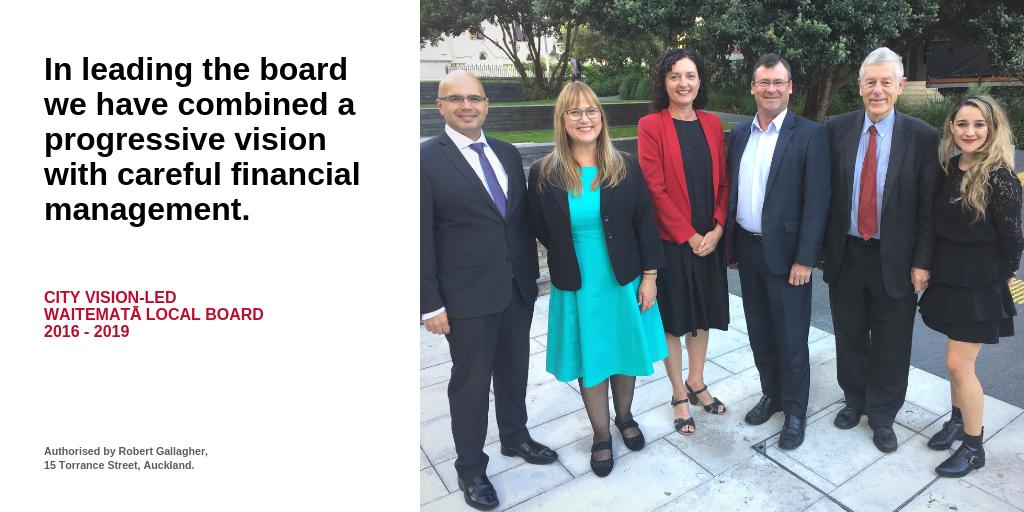 Media Release embargoed until 10am 8 October 2019

A bogus budget claim that the City Vision-led Waitematā Local Board, representing central Auckland, is “40% overspent” has been confirmed as “misleading and wrong”  by the Advertising Standards Authority (ASA)’s Complaints Board. The claim appeared in a widely distributed National party aligned C&R leaflet. As a result a complaint was lodged with the ASA by retiring City Vision board member, Shale Chambers that C&R’s advertising is untruthful and misleading and the claim that has been made cannot be substantiated as factual.

“City Vision is committed to careful financial management.  We are clear about what we stand for and what we represent. It is really disappointing that C&R have not been willing to debate the important issues this election and front up with actual policies but have instead resorted to outrageous claims that are misleading and incorrect.  The bogus budget claim is either a result of incompetence or a deliberate attempt to mislead but either way it exposes a lack of integrity” says City Vision’s chair Robert Gallagher

Auckland Council finance officials have confirmed C&R’s figure is not accurate and that none of Council’s own financial data analysis has been able to establish how such a figure could have been reached.

“I am really pleased that the ASA Complaints Board has upheld the complaint against C&R.  The City Vision-led Waitematā Local Board is proud of its reputation for integrity and careful financial management. The budget the board controls directly is in fact slightly under spent. It is really unacceptable that C&R have attempted to mislead voters but fortunately there’s still time to vote until midday Saturday 12 October based on the accurate information available”  says Pippa Coom Chair, Waitematā Local Board and Councillor candidate for Waitematā and Gulf ward.

In addition to the complaint to the ASA, City Vision has sent a formal complaint to the Electoral Commission against C&R’s candidate Mark Thomas stating that he falsely claimed to be living within the Albert-Eden-Puketāpapa ward when he registered on the New Zealand electoral roll. The ASA has also found a City Vision flyer and website information regarding Chamberlain Park redevelopment plans to be truthful.

City Vision is a progressive coalition between Labour and Green parties, and community independents.  37 City Vision candidates are standing across Waitematā & Gulf and Albert-Eden-Puketāpapa wards and the Auckland DHB. Voting in the Local Elections 2019 ends at midday on Saturday 12 October.

Details of the complaint and decision are available on the ASA website. The complainant was advised of the decision yesterday, 7 October, but it was embargoed by the ASA until 10 am today.

Mānawatia a Matariki — Happy Māori New Year! Matariki is a time for people to gather, to remember those who have passed, celebrate what has happened in the year, acknowledge the present and look to plan for the future.In Tāmaki Makaurau the Matariki Festival started with an Umu Kohukohu Whetū on Ngāti Whātua Ōrākei whenua Takaparawhau before sunrise. The City Vision team were there for the first day of Matariki celebrations and are looking forward to embracing the kaupapa on the first Matariki public holiday.There is a full programme of events, activities and cultural experiences including Matariki ki te Manawa in the city centre www.matarikifestival.org.nz/ ... See MoreSee Less

Our fab Roskill Community Voice team are working with our Albert-Eden-Puketāpapa ward candidates to put on a playground hop this Saturday! ... See MoreSee Less