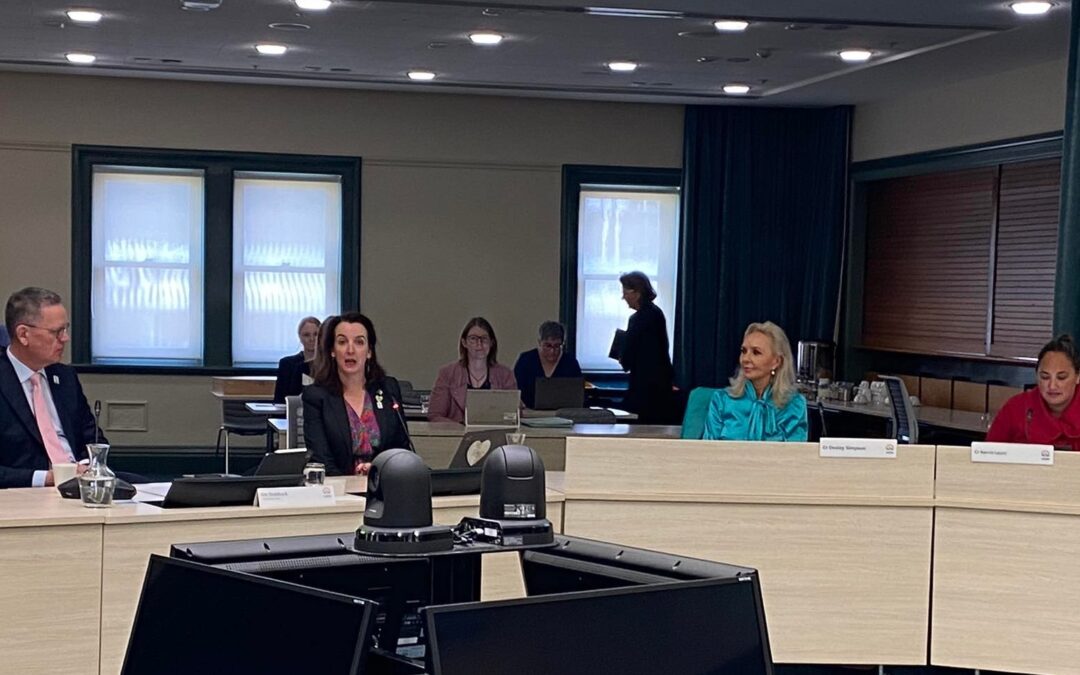 My name is Julie Fairey and I acknowledge the ancestral people and landmarks of this place, the whenua we do this mahi upon, Tāmaki Makaurau Auckland.  I am originally from Kaipatiki; Glenfield on the North Shore.  Te Auaunga Oakley Creek is the awa or river that eases my worries, and Puketāpapa Pukewīwī Mt Roskill is the maunga or mountain that speaks to my heart.

Greetings to all – to the many leaders, to all voices, and to all authorities.

I acknowledge those who have come before me and whose shoulders we all stand on.  May we in turn be good ancestors too.

I acknowledge those who have helped me to get here; family, friends, my small village of childcare helpers, total strangers on Twitter, the campaign team, my hairdresser, and of course my community; sincerely thank you.

I want to take this opportunity to particularly acknowledge Dr Cathy Casey, who retired as councillor for the mighty ward of Albert-Eden-Puketāpapa this year after nearly three decades of local government service here and in the Wairarapa.  I have known Cathy since 2000, when we were both involved in the Alliance party, and have appreciated her staunch commitment to progressive ideas, her support for me personally, and her passionate advocacy for the underdogs, including actual dogs.  I hope that I can build on her legacy, especially around working to end homelessness, and wish her well in her move north.

Over the years many people have influenced and supported me to be where I am today, and I am incredibly grateful for that.  None of us has ended up around this table solely by our own efforts, and we will succeed in this arena only if we work with others too.

Indeed I had some help this time around from people who supported my first attempt at getting elected to local government way back in 1997, when I ran for the Executive of the Auckland University Students’ Association. I won that election against a rival who put a disconcerting image of their own disembodied head on their leaflet.  I adopted one of their policy ideas though; putting bright safety tape on the edge of the stairs up to Shadows to reduce falls at night.  I served on that student executive in 1998 and again in 1999, with Lotu Fuli and Efeso Collins in fact.

Back then we were responsible for services and advocacy for over 20,000 students, including governance of a large catering company, some very valuable property, grants to university clubs and societies, a radio station and a weekly magazine.  (Not so different from a local board, I recognise now).

It was a heady time for me in my late teens and early twenties; advocating against central government’s proposals on privatising tertiary education, standing up for women’s rights, and pushing the university to put student wellbeing at the core of their decision-making.   At the time I thoroughly rejected the idea that any of it was local government, as that was supremely uncool.  Little did I realise I was already hooked.

I spent some time after that too unwell to work, suffering from ME/CFS.  For three years I lived like a lazy orange house cat, volunteering for causes I cared about when I could.  Eventually I was able to work again, at the Mt Roskill Library as a part time library assistant.  I have always loved libraries, and books, and this was a great haven for me as I was emerging from a very shut in existence.  That library is still very much one of my happy places, and I visit often, including helping out as a Justice of the Peace at the CAB.

Once I was able to work full time again I was employed at several different unions, working mainly on education and organising for union members.  I thus have some experience of what it is like to be an officer following the whims of elected members, and I respect the sanctity of the staff room which gives those valuable opportunities to vent.

Most of the time I worked with early childhood staff and those working in primary schools.  Just like at the students’ association, and in local government, it was all about working collaboratively, collectively even, to improve people’s lives, this time focused on their day jobs.

Like many of the public services of our society, education gets by on the goodwill of those who work in it, going above and beyond what the job description says.  I see many parallels with our amazing Council staff in that.  I think of the officers who have over the years answered hard questions, found the money, and generally work hard to make elected members look good.  We could not do this do without them.

In 2010 I was sceptical about this new Super City; I didn’t see how it would deliver everything that was promised, and I worried that the local board structure would be too removed from local communities.  I threw my hat in the ring for a local ticket at the last minute as someone else had pulled out.  I was eight months pregnant, on maternity leave, and had no local profile, so had no hopes and indeed my friend Gwen Shaw who paid my candidate levy did not expect I would be able to pay her back.

The team campaigned, but I didn’t, instead focusing on having my second child and looking after a toddler.  I was shocked to be successful on election day, holding my newborn and suffering post natal depression while my eldest stayed with grandparents.   I can still remember the dismay I felt about how I could possibly do all this, whatever This even was.

And that first term was hard; there was a huge level of uncertainty as no one really knew how things would work.  Lots of elected members, particularly those who had been on legacy councils, thought that it would just be a very part time commitment, a hobby even, but it was very quickly clear it was a twenty hour plus a week professional job even for local board members.

There was just too much to do, too much to set-up, too many people to hear from and assist, to just dip in and out a few hours a month.  The council organisation recognised this too, significantly increasing the staffing support to local boards, to be the highly effective configuration they have now; enabling powerful advocacy, meaningful consultation, and robust decision-making at the most local level, and giving communities a real say.  Helping our communities to “care loudly” as Lesley Knope would say, is not a quiet or modest undertaking.

Twelve years on a local board is a long time; the longest I’ve worked in one place.  I’m proud to have contributed to giving Puketāpapa a place on the regional map, to building a strong reputation with council departments and CCOs, establishing connections with mana whenua, and delivering some wonderful local projects like Te Auaunga in Wesley.  I wish the new board good luck for this term, and look forward to seeing what working with Albert-Eden and Puketāpapa Local Boards from a regional perspective looks like for us all.

I said earlier that I used to think local government was deeply uncool.  And a lot of people definitely still think that, judging by the low voter turn out.  One of my missions, since being first elected in 2010, has been to excite people about the potential of their local council.  The ways that they can work with others to make the positive changes no one can make alone; be that in their neighbourhood, their community, their city, or beyond.  Sometimes what council needs to do is get out of the way, and that’s ok, we should do that.  Often though what we can do is provide connections and resources, information and opportunities to share, and articulate the common ambitions that are out there for a better Tāmaki Makaurau Auckland.

Local government is woven through many facets of our daily lives; every time we flush the toilet, enjoy the shade of a tree, walk to the dairy, eat at the local Thai place, have a go on the basket swing, even when we hear a ruru while we are writing a speech late at night.  Council touches all of these things, and more; what we decide and what council does at our direction is at the very heart of what makes a place and it’s people sing.

It’s important to me that as many of our people as possible have a say in how those decisions are made; how the priorities, processes and projects are set.

At a time when climate action is essential, when social justice is vital, when human connection to each other and the whenua matters so much, the political processes we lead can be catalysts for positive change.

I believe a city is about sharing.  It’s a place where people live together and share resources to make things better.  We can help with that, and we can lead by example too.

I look forward to sharing the mahi with you all over the next three years, as we make positive change together.

Maiden speeches in the news: