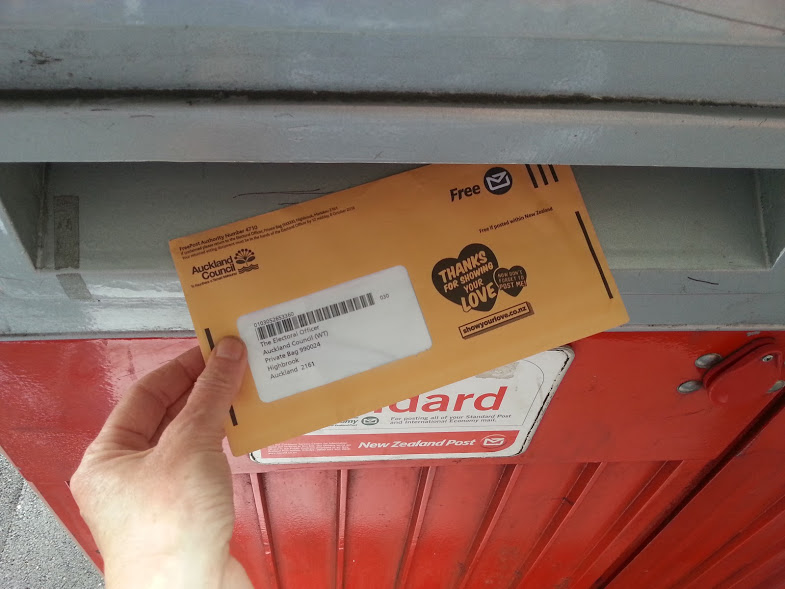 With only three days left to post votes in the Auckland Local Elections 2016, City Vision is calling for an urgent review of the local body election voting system.
City Vision Chair Robert Gallagher is concerned that turnout figures are low, and look set to fall well below fifty percent for the second consecutive election.

“We are calling for all Aucklanders who care about the future of our city to urgently complete their voting papers and post them or hand deliver to a ballot box at the local library. The final day for posting is this coming Wednesday 5 October”

“Additionally, we are calling for the whole voting system to be reviewed, including the following:
Councillor Cathy Casey says she is concerned at the number of voters who claim that they have not received their voting papers.
“I want to know exactly how many Aucklanders did not receive their voting papers and why.  Voters who have not received voting documents have now to cast “special votes” in person at a limited number of locations. It is quite a complicated process.”

“Local democracy is important and we simply cannot continue to accept low turnout elections for positions on Auckland Council, Health Boards and Licensing Trusts. We will be doing everything we can this week to push turnout up, but it is also clear that we need to address the current voting system” says Dr Casey

Contact:
Robert Gallagher  021 365 551
Cathy Casey 027 474 4231
Email: [email protected].com
Website: http://cityvision.org.nz/
Notes:
As at 30 September voting document returns were at 18.28%.
http://www.aucklandcouncil.govt.nz/EN/AboutCouncil/HowCouncilWorks/Elections/Documents/acreturns1.PDF
Voting documents must be posted by 5 October to arrive in time for Election Day. Voting documents can be hand delivered to special ballot boxes at selected locations including local libraries up until midday on 8 October.  Enrolled voters who did not receive their voting documents need to call 0800 922 822 to arrange a special vote.