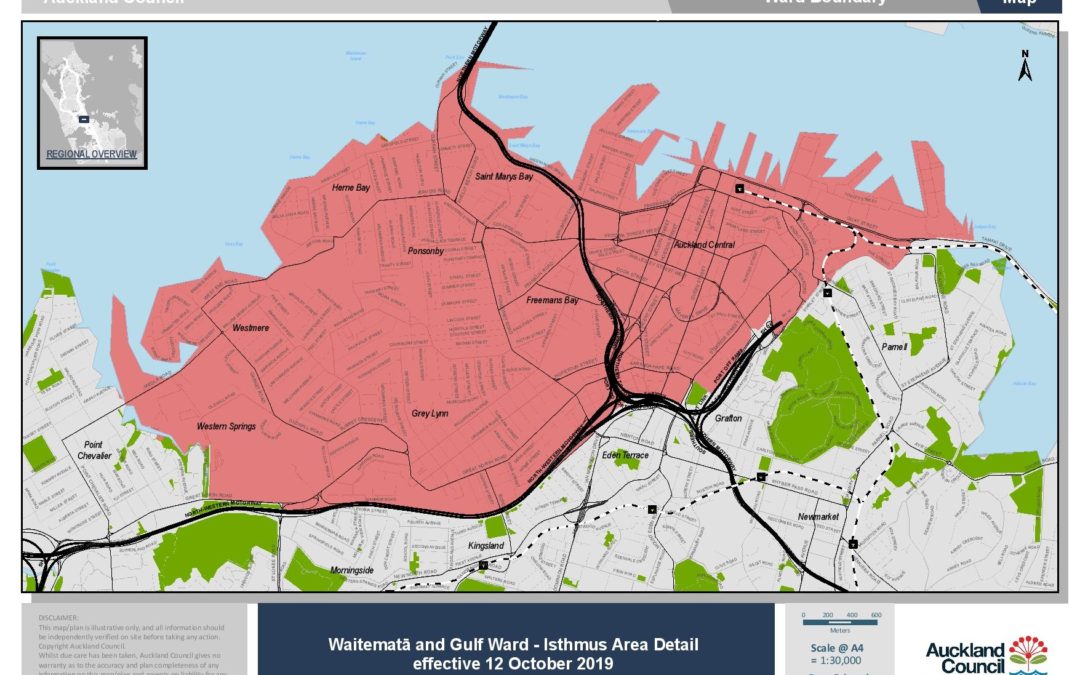 The serious allegations of electoral irregularities and gerrymandering made by Mike Lee (in Gulf News and Ponsonby News) to explain his defeat cannot go unanswered. His arguments set out to undermine a number of important democratic principles.

Under the Local Electoral Act 2001 Councils throughout New Zealand must review their electoral representation arrangements at least every six years.    Just like parliamentary electoral boundaries that regularly change over time with population growth the wards that elect Auckland Councillors should be as equal in the ratio of population per Councillor as practicable. The Statistics Department found that population growth in the central city made the Waitematā and Gulf ward ratio 43% higher than the rest of Auckland – so the ward simply had to shrink.

For Mike Lee to claim that the numbers living in central Auckland should only be considered on the basis of potential “electors” rather than actual “population” to determine the ward boundary is undemocratic and objectionable. From the time of Premier Robert Stout in 1887 who said “this body is supposed to represent people” electoral boundary setting has always been based on the total usually resident population there, so that elected members must also represent children, migrants, homeless people and the marginalised in society

The joint governance working group that I chaired made the initial proposals following the representation review but it was the Local Government Commission that was always going to make the final determination. Legally they were bound to make some changes to counter the under-representation of people in Waitematā and Gulf and would have simply come up with their own changes, if they had not had the Auckland Council’s formally endorsed proposals for changes to adopt. On our Working Party’s recommendation, the Governing Body initially resolved for the Waitematā and Gulf ward to lose roughly equal populations to the east in Parnell and Newmarket and to the west in Grey Lynn and Westmere.  Public consultation revealed that those in the eastern suburbs largely supported or were relaxed about the change, some submitters wanted Waiheke and Great Barrier to be moved to the Rodney ward and a great many in Grey Lynn and Westmere strongly wished to stay in the Waitematā and Gulf Ward. This was a campaign led by Mike Lee supporters that changed the working group’s proposal and restored all of Grey Lynn and Westmere to the ward, with Mike Lee’s fellow so-called “B Team” elected members on the working part outvoting me and the other Labour and City Vision members who proposed at least removing Westmere. The Working Party then had to remove other population to compensate. None of us supported the proposal to take out Mike Lee’s heartland on Waiheke so Grafton was then removed instead to get the ward population down to a number the Local Government Commission could accept.

Even with the boundary changes the four isthmus wards still all have populations significantly over the average of 82,860 people per councillor so it is very likely more ward boundary changes will be required in 6 years’ time. It is outrageous and disappointing of Mike Lee to claim that the Working Party I chaired but did not always get my way on, then the Governing Body and, above all, the independent body, the Local Government Commission, engaged in “gerrymandering” to make Waitematā and Gulf more City Vision-friendly.

City Vision, a progressive coalition, has actively funded and supported Mike Lee through many campaigns  for over 20 years.  He wrote to City Vision saying he did not want our endorsement this time as his position increasingly became anti- Phil Goff and his policies moved away from City Vision’s values and principles.

Auckland Council staff set up “One Stop Shops” for the first time this election to allow people the opportunity to enrol and vote at the same time.  Across Auckland these mobile ballot boxes visited night markets, university campuses, Marae and events such as the World Homeless Day celebration.  Like many other candidates, including City Vision’s candidates, Mike Lee could have taken the opportunity to legitimately campaign near the One Stop Shops.  For Mike Lee to now claim that this One Stop Shop activity was “highly questionable” is anti-democratic and insulting to all those who fairly participated in the local government election and exercised the right to vote.

When I spoke recently at my election as Waitematā Local Board chair I specifically praised and acknowledged Mike Lee’s long and substantial service and contribution to the public life of the Auckland Region. When I lost my Council seat in 2013 I acknowledged that I had simply been defeated by someone the public saw as a fresh voice who would make a better contribution. Mike Lee should not purvey conspiracy theories but retire gracefully and simply accept that the people believe that Pippa Coom now has a strong positive vision and more to offer the city.