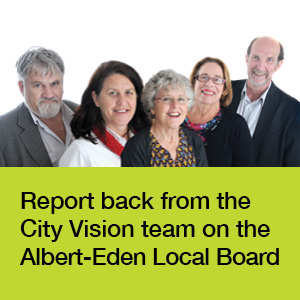 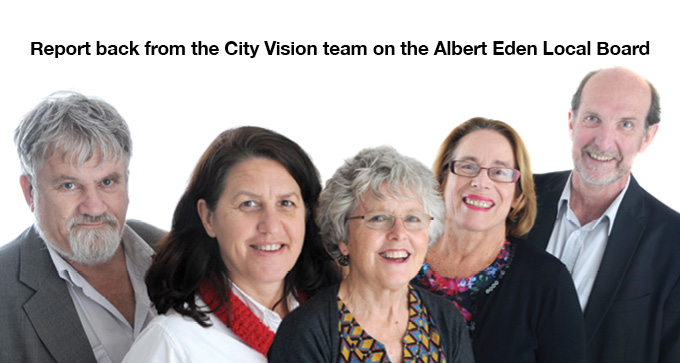 Report back of the City Vision team on the Albert-Eden Local Board. Helga Arlington, Graeme Easte, Deputy Chair Glenda Fryer, Chair, Peter Haynes and Margi Watson are bringing wide-ranging skills and experience to work for you and your community. 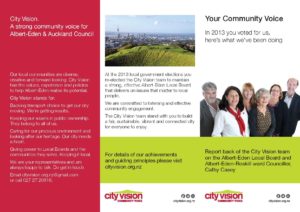 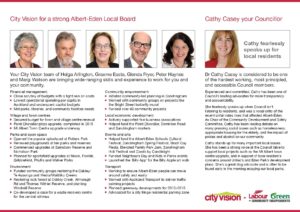 Cathy Casey your Councillor for Albert-Eden-Roskill

Dr Cathy Casey is considered to be one of the hardest working, most principled, and accessible Council members.

Experienced and committed, Cathy has been one of Council’s leading advocates for more transparency and accountability.

She fearlessly speaks up when Council isn’t listening to residents, and was a vocal critic of the recent unfair rates rises that affected Albert-Eden. As Chair of the Community Development and Safety Committee, Cathy has been leading debate on  many pressing social issues such as homelessness, appropriate housing for the elderly, and the impact of pokies and alcohol on our community.

Cathy stands up for many important local issues. She has been a strong voice at the Council table to support local projects such as the Mt Albert town centre upgrade, and in support of local resident’s concerns around Unitec’s and Eden Park’s development plans. She’s a great dog advocate and is often to be found early in the morning enjoying our local parks.