Setting the record straight on privatisation 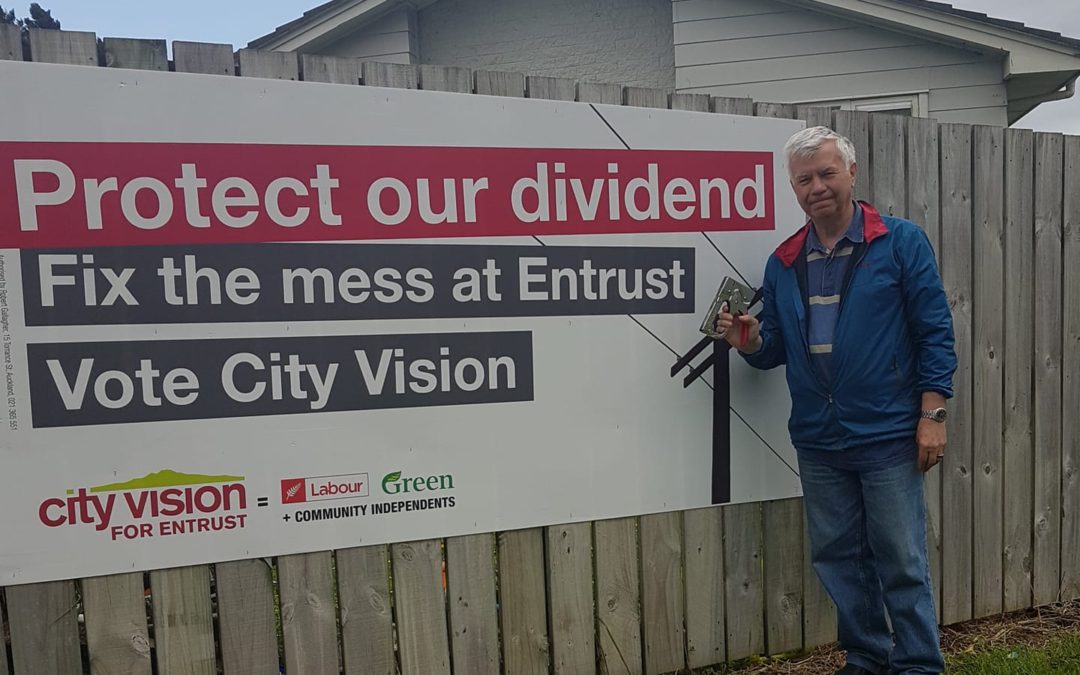 Peter Neilson, City Vision for Entrust Team Leader comments on C&R’s statement made by William Cairns on the further privatisation of Vector.

Entrust the former Auckland Energy Consumers Trust (AECT) owns 75.1% of the shares in Vector the Auckland electricity lines company.   The voting papers for the Entrust trustee elections start arriving in the mail from today so it is important that privatisation issues are clarified.

Independent polling commissioned by City Vision shows that Aucklander’s overwhelmingly do not want any more of Vector sold off.  City Vision believes one of the live options for the further privatisation of Vector is not prevented by William Cairns’ misleading words of comfort issued on 10 October.

There is a live proposal from the UBS merchant bank, which the Chair of Vector has confirmed, seeks to have UBS introduce a client to purchase the Auckland network assets of Vector.  This would be a sale of assets by Vector, not by Entrust so fits easily with the C&R misleading words of comfort and so is not ruled out.

As Dr Phil tells us past behaviour is the best predictor of future behaviour.

In the then, AECT 2003 trustee election, C&R were elected on a policy to “Keep Vector in public hands” A little over a year later 24.9% of Vector was in private hands with the support of the C&R trustees elected on a policy that to most people sounded like a firm pledge not to sell off Vector.

In September 2004 Justice Paterson in his judgment determined that trust law trumped political election pledges and democracy. Following that judgment, the trustees who had been elected to oppose the privatisation of Vector were forced to agree to the sell down of the Vector shareholding. This “liar’s charter” means that C&R can promise to oppose privatisation before this election and then do the exact opposite after the election.

Current C&R Entrust trustee and candidate for election Karen Sherry has an even more colourful history on the privatisation of Vector. As outlined in a Brian Rudman column in the NZ Herald published on 1 August 2003, in which he wrote, “In October 2000, the centre-left Powerlynk team fought and won a majority on the trust board by pledging that the trust-owned electric lines company, Vector , would not be privatised-wholly or partly-if we installed them in office. Karen Sherry, leader of the centre-left ticket couldn’t have expressed her anti-privatisation beliefs any stronger at the time. “Powerlynk is a team of independent, concerned Aucklanders who will keep 100 per cent ownership…”We do not favour any change from 100 per cent community ownership. Privatisation will put profits above fairness and service.”

After being elected as a strong advocate against the privatisation of Vector Karen Sherry then re-joined the C&R trustees and used her vote 3 years later to ensure 24.9% of Vector ended up in private not trust ownership.

These are the people who are asking Aucklanders to give them another chance to betray our best long term interests by off selling more of Vector.

Fool me once, shame on you, fool me twice shame on me. When your voting papers arrive in the mail, make sure you vote for trustees who are genuinely opposed to the further privatisation of Vector, concluded Peter, economist, former cabinet minister and City Vision for Entrust Team Leader.