South Auckland holds the key to the Entrust Election 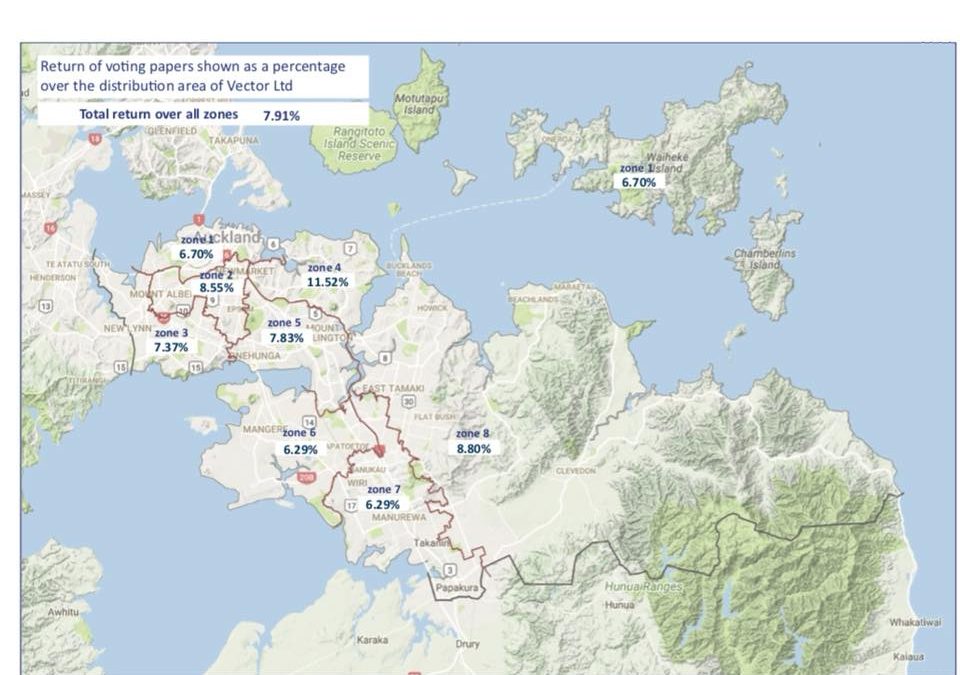 Wealthier areas of Auckland traditionally have a much higher voter turnout than other parts of Auckland benefiting C&R (National Party aligned candidates) in the Entrust Election.  The daily voting document returns as at 19 October showed the Remuera area at 11.5% compared to the area around Manukau at just over 6%.  Fortunately there is still time to vote.  There are important community issues at stake.

“While the political focus is currently on the unprecedented turbulence coming from the National Party and the Botany Electorate, the Entrust trustee election has been underway in Auckland  with important issues at stake says Peter Neilson economist, former Labour cabinet minister and City Vision for Entrust Campaign Team Leader. The South Auckland turnout for the Entrust election, to elect 5 new trustees will probably determine who will win control of Entrust. Entrust (formerly known as the Auckland Energy Consumer Trust) holds 75.1% of the shares in Vector the Auckland electricity lines company on behalf of consumers.

There are 302,000 people eligible to vote in the Entrust election but last time fewer than 13% voted.The first voting figures available point to a higher turnout this time but the turnout in South Auckland currently lags the more prosperous parts of Auckland.

If you are the person whose name is first on the power bill living in the old Auckland or Manukau cities or the northern parts of Takanini, Papakura and Franklin you are eligible to vote in the Entrust trustee election.

If you recently received the $350 dividend (annual payment) you are the one in your household eligible to vote. Your voting papers should have arrived in the mail by last weekend.

There are a number of very good reasons to vote for a change in this election.

Over the last 3 years while the current all C&R trustees have been in place;

There is also a live proposal confirmed by the Chair of Vector, the NBR and The Australian newspapers that the UBS merchant bank wants to introduce a buyer to purchase the Vector’s Auckland electricity network. Privatisation would likely cut or eliminate the current $350 annual payment as under the Entrust trust deed it is the Auckland Council that has a claim on the proceeds from a sale of Vector not the recipients of the annual payment.

While this has all been occurring the trustees have been fighting amongst themselves, one even taking another trustee to court while another one, has accused their Chair of “bullying” and also of acting “unprofessionally” when the long-term Chair of Vector Mike Stiassny was fired.

The City Vision (Labour and Green) Entrust trustee candidates including Robert Reid from South Auckland are pledged to;

The City Vision Team of Glenda Fryer, Richard Leckinger, Simon Mitchell, Peter Neilson and Robert Reid will stand up for all consumers across Auckland including the South. We want to put the consumer and trust back into Entrust. It’s time for a change of trustees at the trust.

A lift in the voter turnout across South Auckland would change the Entrust trustees from all C&R to better reflect the interests of all Aucklanders.  Please vote now.