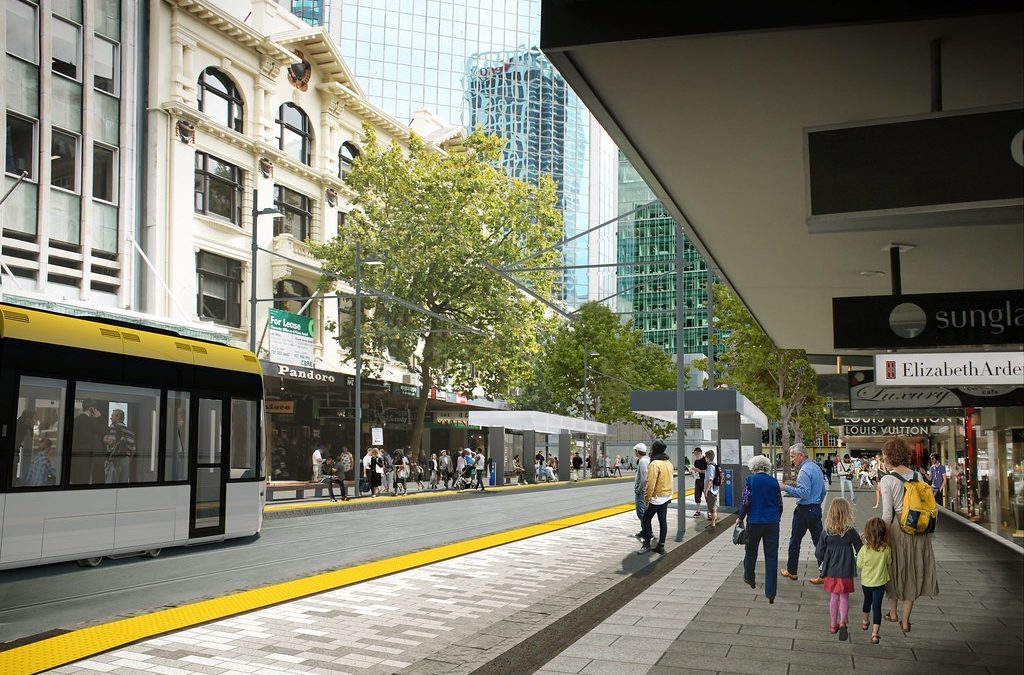 City Vision candidate for Waitematā Local Board, Graeme Gunthorp and manages a portfolio of shopping centres around New Zealand in this post,  first published on Greater Auckland he writes why the Queen Street Transit Mall will make driving more efficient

Intersections are known as “conflict points” for good reason – people, vehicles, bikes going every which way, crossing paths and slowing each other down.

Queen Street bisects Auckland city centre, between the laneway east and the turbo road west. It’s our retail heart, and the main pedestrian thoroughfare into the city from the ferries and trains of Britomart.

Current plans are to convert it from a four lane arterial going nowhere, to a transit mall with light rail and (hopefully) cycle lanes.

While several current and future projects will reallocate space and change the way vehicles traverse the city centre (most notably Access 4 Everyone), several routes will remain across Queen Street:

In this article, I’ll focus on why removing vehicles from Queen Street will make remaining crosstown traffic more efficient, demonstrated by the intersection of Queen & Victoria Streets.

Under the current light setup there are five phases, with each vehicle direction having a green or amber light for 10-19% of the cycle.
Pedestrians have 37 seconds to complete their barnes dance, around 39% of the total cycle. This used to be even longer, with pedestrians given a second phase between the vehicle movements (apparently AT engineers used CRL as an excuse to get rid of the double phasing).
You can see how drivers get frustrated while stuck at the lights, given such a small proportion of the overall cycle.

Following conversion of Queen Street to a transit mall, and Victoria Street to linear park, the cycle can be reduced to 60 seconds and only two phases.
While vehicles crossing Queen Street are getting around the same phase length (20 seconds vs 18 seconds), their share increases from 19% to 33%!
Pedestrians also get a slight increase in their allocated time, but the shortened crossing distance and widened Queen Street footpaths means the capacity is hugely increased, and their waiting time reduced from 61% to 33%.

The results will be similar for Customs and Wellesley Streets, enabling more efficient movement of vehicles through the city centre – albeit at safer speeds.

There’s also potential to apply this to other parts of the city, where shared street programs, removal of on-street parking, and junction upgrades will enhance pedestrian amenity and improve wait times for vehicle traffic.