Walking and Cycling on the Harbour Bridge – let’s do it 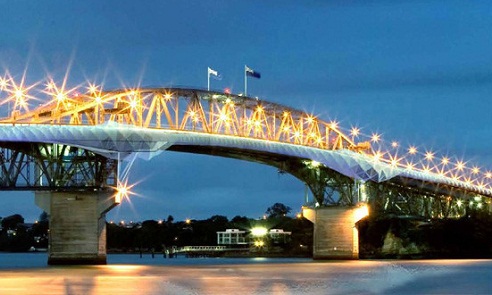 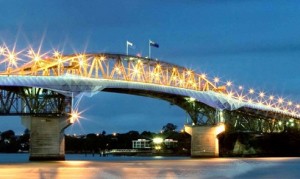 The 1954 decision by the government of the day to build an Auckland Harbour bridge with only four lanes was one of Auckland’s original ‘sins of the fathers’.  Well transport sins anyway. The others were the cancellation of rail electrification the same year and – the most mortal sin of all – the termination and destruction of Auckland’s highly successful electric tramway in 1956.

The original penny-pinching on the Harbour Bridge resulted in the ‘Nippon Clip-Ons’, but the short-sighted exclusion of walking and cycling has lasted to this day.

In May 2009 I was one of thousands of Aucklanders who walked and cycled across the bridge to celebrate the 50th anniversary of its opening.  The authorities at first tried to stop the crowd but sensibly soon gave up.

Since that time the organiser of that ‘Get Across’ rally, Bevan Woodward, has come up with an exciting proposal he calls ‘Skypath.’  This is a specially built enclosed walking and cycling lane on the eastern side of the bridge.   The $30m proposal has been ticked off technically by the bridge owners NZTA, and backed by private money (Morrison & Co and the PIP Fund).  But it needs a council underwrite to work. Over the last couple of years Skypath has worked its way through the Council bureaucracy, periodically pushed along by my Transport Committee. The Council has given leadership of Skypath to ATEED’s ‘can-do’ chief executive Brett O’Riley, and due diligence work is now underway. There are technical issues to be sorted out with the approaches on both sides of the Harbour and our Council transport staff and Skypath will be working through them with the St Mary’s Bay Association, the Northcote residents Association and the Westhaven Users Association.  Once these are sorted, hopefully by December the new council will be able to sign off on the underwrite and work can begin at last to make walking and cycling on the Auckland Harbour Bridge a reality.  The Skypath will add value to our Harbour Bridge and enhance quality of life for Aucklanders and our visitors.

In terms of dealing with the other ‘sins’ – Auckland’s first electric train arrived in the Port on 25 August, the first of a whole fleet. As for the trams, if we can extend the tramway to Britomart Auckland can look forward to a light rail renaissance in the 21st century. Read more here