Bring Back the Trams 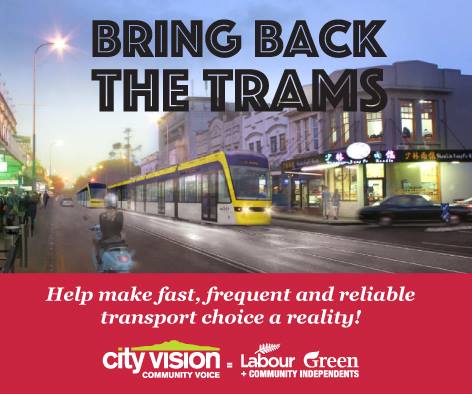 “City Vision is proud to launch a major new campaign to Bring Back the Trams to our central suburbs. Sixty years after trams were removed from our major arterial roads, our streets are choked with cars, causing delay, costs, and pollution. We believe that a modern light rail system is the key to solving these problems in our communities”, says City Vision Councillor for Albert-Eden-Roskill Ward Cathy Casey.

“It’s simple. When people are offered a clean, efficient, reliable public transport service they use it. We know this, because the buses that go through major arterials in our communities are maxed out – witness the chaos this morning as up to ten full buses passed waiting commuters along Mt Eden Rd! The central suburbs are part of a rapid transport “void” identified by Auckland Transport, and Light Rail is the ideal way to move people around our communities and to the CBD quickly and cleanly”, says City Vision Chair of the Albert-Eden Local Board Peter Haynes.

“We also know that a modern Light Rail system is one of the best ways of enlivening our village centres. When people have access to fast, reliable public transport it becomes viable for them to go to their local centre to shop, eat, and socialise. Light Rail has the ability to positively transform many of our village centres that are otherwise choked with traffic and often struggle to compete”, says Roskill Community Voice Chair of the Puketapapa Local Board Julie Fairey.

“To Bring Back the Trams for our communities we need people to get on board. The indications are that Auckland Transport is seriously considering the idea. Our campaign is designed to show that there is huge community support for Light Rail. We encourage people to sign up to the campaign and tell us how Light Rail could work best for them”, says Cathy Casey.

“It’s time to Bring Back the Trams”