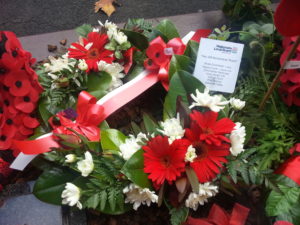 I am honoured to stand before this magnificent commemoration mural this year on behalf of your Waitemata Local Board of Auckland Council. Deputy Chair Pippa Coom and I are here to support the Grey Lynn Returned Services Club and local residents and neighbours as we remind ourselves to a new generation how important peace, independence, fairness and freedom is to our communities in Auckland, and the price we have in the past paid for that.

Today at over 70 parades and services across Auckland we reflect on and recognize the sacrifice, courage and unselfish devotion of those men and women who served their country in war, in the pursuit of what they believed, on many occasions at the cost to their lives.

This day 100 years ago the Gallipoli landings took place and the ANZAC legend began. It has become central to New Zealand and Australia’s national identity and cultural heritage, and yet the Gallipoli campaign was a tragic disaster.

Last year I visited Gallipoli. Without crowds, speeches and hymns there was a quiet, poignant beauty to a glorious coastline with towering hills, a sea of deepest blue and beaches that reminded us of home. Not the bloodstained hell that it was 100 years ago.  The only sound we heard was the gentle lapping of the waves on the shore.

100 years ago today the first of 14,000 New Zealand soldiers to serve on Gallipoli landed at dawn on the ANZAC Cove beaches, shortly thereafter joined by the Wellington Regiment, of which my grandmother’s favoured older brother, Sydney Smith was a part.

An ANZAC. Sydney had been born and raised in a Maori Pa, as a te reo speaker, where his parents taught in a Canterbury rural Maori school and had been given the second name of Pawhate, reflecting New Zealand’s early bicultural history.

A new New Zealander. On my Gallipoli visit last year I visited our sacred sites:  Anzac Cove, Lone Pine, Shrapnel Valley and Chunuk Bair where the New Zealand memorial faces a giant statue of Ataturk, whose moving words embracing fallen enemies are now engraved on the Memorial at ANZAC Cove.  This is what it says:

“Those heroes that shed their blood.   And lost their lives.  You are now lying in the soil of a friendly country.  Therefore, rest in peace.  There is no difference between the Johnnies and the Mehmets to us where they lie side by side.  Here in this country of ours.  You, the mothers, Who sent their sons from far away countries.  Wipe away your tears.  Your sons are now lying in our bosom.  And are in peace.  After having lost their lives on this land.  They have become our sons as well.”

Sydney survived the living hell that was the slaughter, and stench of death from the shells, machine guns and the snipers, and the campaign’s singular achievement of helping to capture and hold the heights of Chanuk Bair. Like all he survived on bully beef, biscuits with jam, and water, all eaten or swallowed with the plague of flies that stuck to everything, and from which there was no escape in the hot summer sun. And with the flies came disease.

On being evacuated to Cairo at the end of the Gallipoli campaign, sick and weakened Sydney, like many thousands before him, soon died of dysentery and is buried in Cairo. Not as one of the 2,800 who died in action on the peninsular but as one of the 8,000 who became Gallipoli casualties. Another young and promising life cut short; one of the 18,500 New Zealanders who would eventually lose their lives in this Great War. He was 21.

At Gallipoli we visited cemeteries that were once small, intense battlefields; only a dozen yards sometimes separating opposing trenches.  Our soldiers were buried where they fell, but in places now ablaze with irises, pink flowering Judas trees, the purple flowers of wild thyme and hedges of rosemary.

We do not and must not glorify war, but it is important we remember we have peace and freedom here because of the actions of those who lived in communities like ours, but who went and fought in wars for that freedom over the last one hundred years.

Our ANZACs and all who have served our country will be held in our hearts and minds forever.

‘We know we do not stand in the shadow of earlier generations but on their shoulders, the better to see the promised land.’

We do remember them.