A Living Wage for Auckland Council: an investment in people 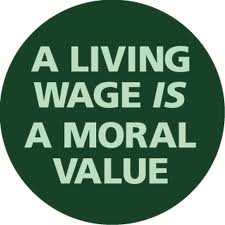 “A living wage is the income necessary to provide workers and their families with the basic necessities of life. A living wage will enable workers to live with dignity and participate as active citizens in society.”

“We urge the introduction of a Living Wage for all Council staff and, in the longer term, for CCOs and Council contractors and service providers.”

There are broader economic benefits in paying a living wage and the costs associated with low wages are passed on to the community at large. Low wages affect individual workers, the households in which they live and their wider community. When wages don’t meet the requirements of the worker and their family to participate in the community, the shortfall is made up by society one way or another, socially or financially. Subsidies need to be applied elsewhere to make up for these deficits and they come from ratepayer and taxpayer. The withdrawal of citizens from participating in the community is detrimental to local economies which wither and suffer from a lack of engagement. Low wages mean that people have less time and money to engage with family and friends.

How much is the Living Wage?

The generally accepted rate is $18.40 per hour as calculated by Peter King and Charles Waldegrave of the Family Centre Social Policy Research Unit.

There is a growing number of working poor in New Zealand. 90,600 workers are on the minimum wage ($13.50 per hour) and more than a third of all waged workers earn less than $18 per hour. 40% of poor children come from families in which at least one person is in full time work or self-employed. We can do so much better than this.

There are compelling overseas precedents for the success of the Living Wage in countering these social and economic ills:

In 1994, a living wage was introduced in the US city of Baltimore. This is the  longest-running ordinance and its ramifications have been widely studied.

In 1996, the Preamble Centre for Public Policy pointed out that first year nominal contract costs rose by 0.2% but after adjusting for inflation costs declined by 2.4%.

The Economic Policy Institute found in 1999 that nominal contract costs rose by 1.2% – lower than inflation for the same period – budgetary impact of the ordinance therefore minimal.

A study found that total labour costs increased by US$2.5 million a year (when $30-$40 million had been predicted), proclaiming that “there is no significant positive or negative effect on the city’s fiscal health or the local economy from the local wage ordinance.”

A 2003 study surveying administrators in 20 cities and counties that had adopted living wage ordinances since 2001 found that in most municipalities: “contract costs increased by less than 0.1% of the overall local budget in the years after a living wage was adopted”.

Orthodox economic theory states that increasing wages generates job losses, but this is not supported by evidence.

A 1994 study by Card & Krueger found that as wages rose for workers in New Jersey, employment increased in all cases. The 1998-2001 San Francisco airport study showed that against a background of 9% decrease in airport activity and city-wide employment increase of 1% in that period, employment in jobs covered by the living wage ordinance rose by more than 15%. The Los Angeles living wage ordinance affected 7,700 workers yet less than 1% of the workers lost their jobs.

What are the benefits?

Paying a living wage often produces significant increases in productivity while simultaneously reducing staff turnover and absenteeism. The San Francisco study showed that turnover rates among security screeners dropped from 94.7% to 18.7% when wages were raised from US$6.45 – US$10. In Los Angeles, 16% of the additional costs of the living wage policy were offset by decreased staff turnover.

If firms competing for contracts can no longer rely on wage suppression as their sole competitive advantage, more firms can participate resulting in greater competition as barriers to entry are reduced.

For more detailed analysis of the viability of a Living Wage for Auckland Council, you can read this paper by Living Wage Aotearoa.