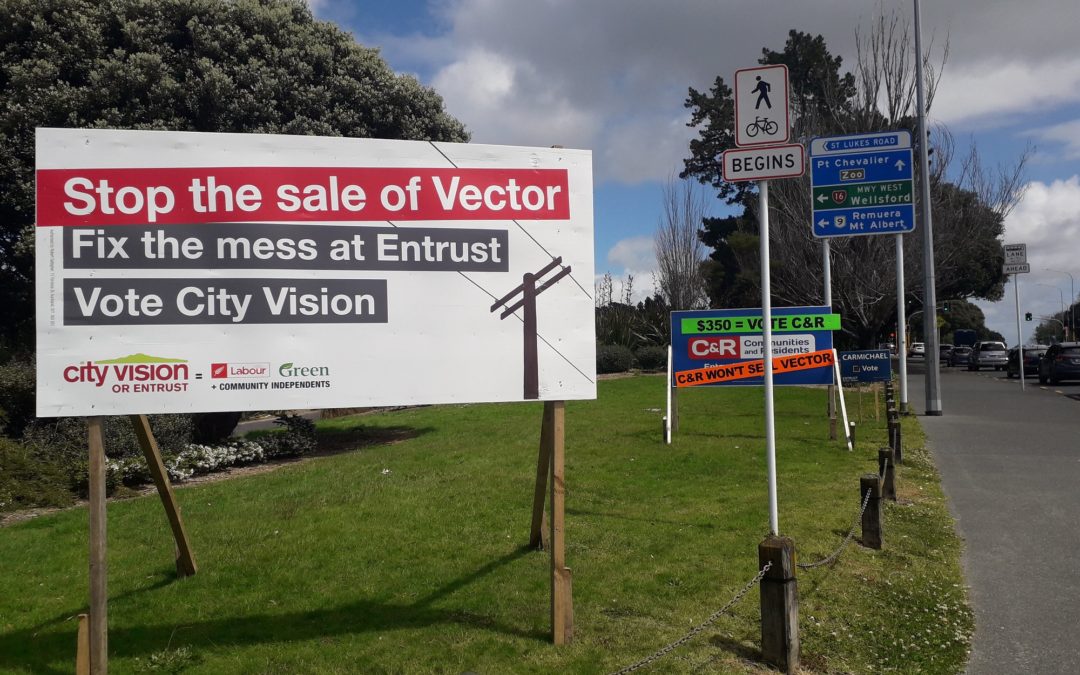 Voting documents need to be posted by Monday 22 October to protect and maintain your dividend of $350 and stop the privatisation of Vector.

How is it possible that C&R (National party aligned candidates) are making the misleading claim that “$350 = Vote C&R”?

Entrust owns 75.1% of the shares in Vector (worth $2.1 million).  The dividend (annual payment to shareholders) of $350 from this ownership is paid to all electricity account holders in the old Auckland Electric Power Board area.   C&R Trustees are able to manipulate the timing of the $350 payment so it arrives just before the election starts and claim credit (through advertising paid by us) for maximimising the return each year.

In fact C&R have not been effective trustees. The $350 annual payment has not kept pace with inflation so buys less than the annual payment paid back in 2015.

City Vision for Entrust (Labour, Green and community independent team) is committed to protecting the annual $350 payment.  We will review the operations of Vector and Entrust, to see how we might increase the annual payment going forward and investigate paying it earlier. Your annual $350 payment is safe with us.

Despite the claim “C&R won’t sell Vector”  C&R are not being honest.  Your annual payment s also under threat because C&R have plans to further privatise Vector.  There is currently a live proposal for the UBS merchant bank to sell the Vector Auckland network to a private organisation.  If all or part of the Entrust 75.1% share is  sold it will result in a lower dividend.

C&R cannot be trusted on the further privatisation of Vector.  In 2003 C&R campaigned on “keeping Vector is public hands” then about a year later they had voted to allow 24.9% to be privatised.  As candidates they can say they are opposed to privatisation but as trustees or directors they will use the argument they are obliged by law to do so and can then ignore their election promises.

Only the City Vision team has ruled out all of the options for further privatisation of Vector. Only a vote for City Vision will secure and protect your $350 dividend.