AECT trustees to be scrutinized over poor Vector results 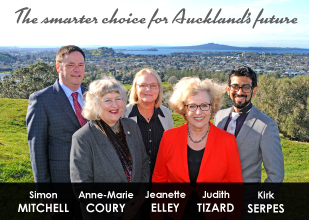 AECT trustees to be scrutinized over poor Vector results

The five incumbent Auckland Energy Consumer Trust (AECT) Trustees will be held to account and asked to front up about their controversial performance at the Trust’s AGM this evening (Thursday 29 Oct) at 7pm, just 22 hours before voting closes for the AECT elections.

“This is the only AECT trustee meeting that is held in public.  The 320,000 beneficiaries of the Trust deserve answers about the Trustees’ performance, their future plans and why potentially negative results are being withheld until the eve of the close of the election”. says City Vision candidate Jeanette Elley

“I will be attending the AGM with City Vision candidates Judith Tizard, Kirk Serpes and Anne Marie Coury.  We will be asking why there is no comment on Vector’s performance in the AECT Annual Report” say Ms Elley

Despite crowd-pleasing increases in the Vector dividend, Vectors earnings have actually been dropping steadily, with earnings per share (EPS) of 20.0, 16.9 and 14.7 respectively over the past three years, meaning a drop of 27% in the past two years.  I intend to ask  “How does the AECT see Vector’s prospects, and how will they ensure returns to shareholders in the future, when rapid changes in the sector and Vector’s recent results indicate reducing electricity demand?” says City Vision candidate Judith Tizard. “Will the current trustees, if re-elected, cave in to the demands of their C&R colleagues Christine Fletcher and John Collinge and, contrary to their promises, hand Vector over to Auckland Council when the going gets tough?”

“As well as withholding results from 320,000 voters I am deeply concerned about the cynical timing of the AGM that ensures the incumbent Trustees receive very belated scrutiny and negative results are not able to influence the outcome of the AECT elections” says Ms Tizard

The Trust’s only asset is 75% stake in Vector Ltd valued at approximately $2.5 billion. Over $110m in dividend payments to beneficiaries of the Trust were paid out in 2015. The operational cost of running the Trust is $3.5m. The 5 Trustees receive a total of $342,500 in trustee fees.

The triennial AECT election officially closes on Friday 30 October. To arrive in time voting papers must be delivered in person to the polling place at Election Services, Level 2, 198 Federal St, Auckland by 5:00pm on Friday