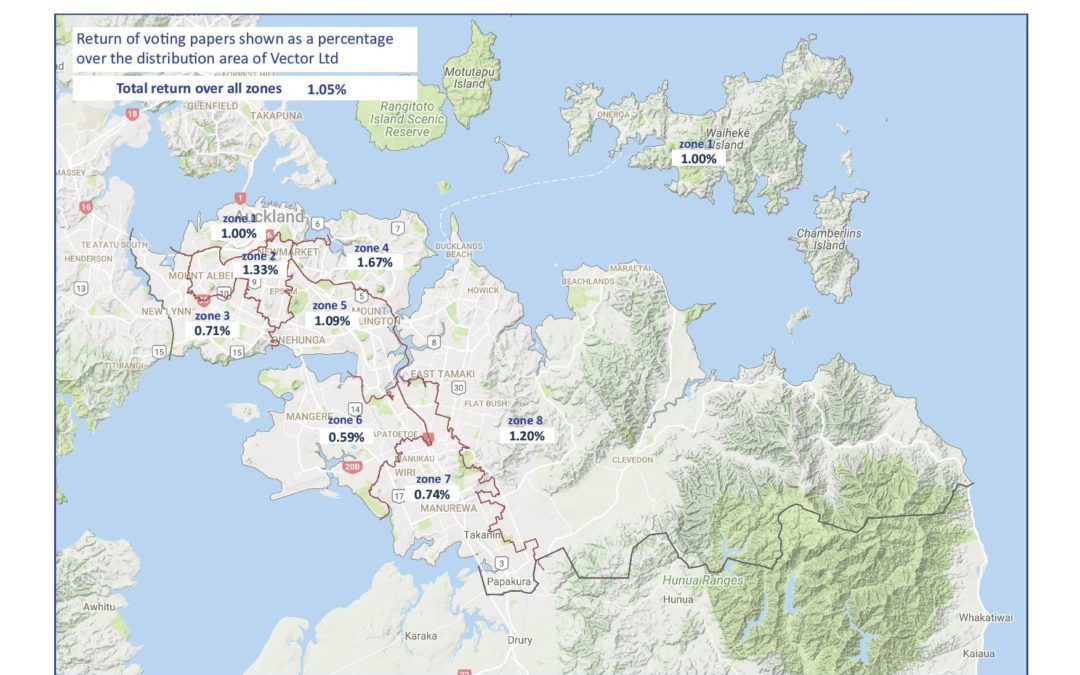 The returning officer for the Entrust election has reported a first day vote count of 3078 way more than the 471 recorded on the first day of voting back in 2015.

“A higher than usual turnout often signals a change election” says Peter Neilson Team Leader for the City Vision for Entrust Campaign. “Aucklanders in polling we commissioned, from Horizon Research said they were strongly opposed to, any further privatisation of Vector, wanted the Entrust trustees to be better advocates for the electricity consumer and had a high level of concern about the reliability of our electricity network”.***

It is fairly easy to see why the turnout is so much higher this year;

There is a live proposal for Vector to sell off its Auckland network to a private party to be introduced by the merchant bank UBS. This has been confirmed by the Vector Chairman Michael Stiassny, and reporters at the NBR and The Australian.

Vector’s regulator the Commerce Commission has penalised Vector for excessive power outages in 2015 and 2016 and foreshadowed similar penalties for 2017 and 2018.

Over the last three years the current $350 dividend paid by Entrust has not kept pace with inflation so has declined in terms of what it can buy.

The earlier agreed $10.5m budget for undergrounding overhead wires and poles was cut so the complete undergrounding programme would take more than 1000 years to be finished.

While this poor performance continues, the 5 current C&R trustees have been fighting amongst themselves, taking each other court and accusing each other of bullying and unprofessional conduct. They have also dropped, respected company director Michael Stiassny as the Chair of Vector.

The C&R trustees have been paid an average of over $100,000 a year as trustees or directors while this mess has unfolded.

New Zealander’s rarely re-elect a third term government. This third term C&R trustee group seem to have lost their focus, forgetting the consumers who elected them while indulging in infighting

It looks at this stage that the final Entrust election turnout will be well up on the less than 13% achieved in 2015. City Vision is looking to lift the turnout across the city.  As a united team, pledged to protect the dividend, accelerate the undergrounding programme, strongly opposed to any further privatisation of Vector and wanting to work with Vector to improve the reliability of our electricity network (full City Vision for Entrust policies here) we are well placed to benefit from the increased turnout that is occurring concluded economist, former cabinet minister and City Vision Team Leader Peter Neilson.

There are nearly a further 9 days before postal voting closes at 5pm on 25 October for the 302,000 eligible voters. If you have not already voted open up the envelope, pick your 5 City Vision trustees and post back the envelope by 22 October 2018 to be counted.

Which of  these matters, if any, is most likely to result in you voting in the Entrust election?