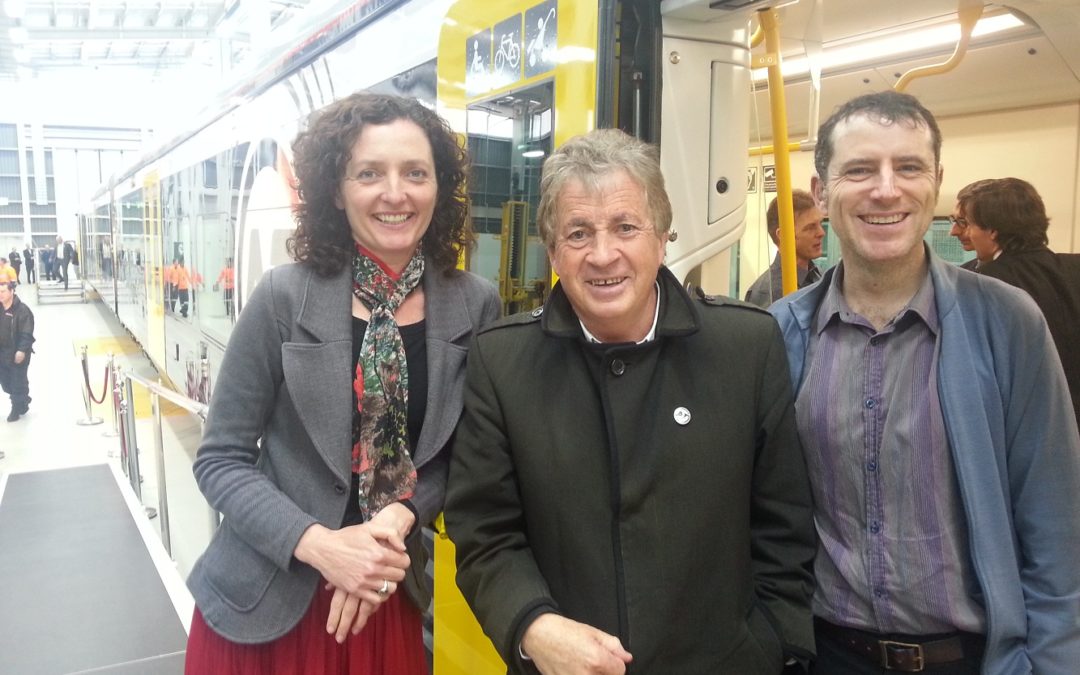 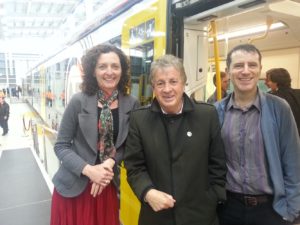 Cr Mike Lee was acknowledged today by the Mayor Len Brown as instrumental in bringing electric trains to Auckland at the unwrapping of the first train to arrive from Spain. The trains will be gradually introduced into passenger service on a line by line  basis until all 57 electric trains are in service later in 2015. These trains will replace Auckland’s ageing diesel fleet.

Mike Lee was Chairman of the Auckland Regional Council when funding was secured from the Clark/Cullen Government (backed by the Green Party)  for the electrification of the Auckland rail network in 2007.   After the unveiling Mike recalled that it’s been a long and sometimes difficult road.

“As  I listened to the excellent speeches of Mayor Len Brown and others I recalled a meeting organised by Keith Locke and the Green Party to support the ARC’s battle to convince the government to electrify Auckland’s rail network. It must have been 2007 and it was in a church on Queen Street (since demolished).  Apart from making the obvious joke about ‘preaching to the choir’ I predicted that electric trains would not only transform Auckland – but transform the way Aucklanders think about their city.Seeing how beautiful this new train is I am confident my prediction will be borne out. At that meeting I also quoted Arthur Shopenhauer “All truth passes through three stages.  First it is ridiculed. Second it is violently opposed. Third it is accepted as being self-evident.”

Soon after that the Labour government approved the electrification project but early in 2009 the new National Government reversed the decision – and so we had to start all over again. But we got there in the end.  Today is a momentous one for Auckland – one of those days which makes public service so rewarding.”

Christopher Dempsey, City Vision member of the Waitemata Local Board  took his bike along to try out how well the new trains can carry bikes. The carriage has been designed with the ability to hold up to three bikes. 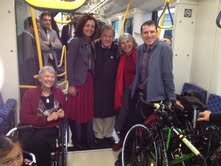 Plenty of room on the new trains for bikes and wheelchairs

“Bikes on trains are key to extending the reach of cyclists, both commuter and recreational. The new CAF trains will have enough space for a bike or two at peak times, and several more (up to 12) at off peak times, enabling greater access across the region to shopping centres, parks and other places of interest, where the rain network currently operates. The space where the bikes can be safely stored has been designed in conjunction with Cycle Action Auckland, and with representatives from the wheelchair community, to ensure that there is minimal conflict between bikes stored on the train, and wheelchair users. Look out for the first train service with these new trains on the Onehunga branch line through to Britomart, later in the year.” says Christopher

Wider doors mean that passenger flow, on and off the trains, will be faster and easier for people with disabilities. Wheelchair users and others who are mobility impaired will be able to use automatic ramps on the central carriage doors providing a seamless transition been the platform and the train.

Everyone at the event was hugely impressed with the stunning new kit and excited that electric trains have finally arrrived providing the best of European standards but tailored to meet Auckland’s needs. 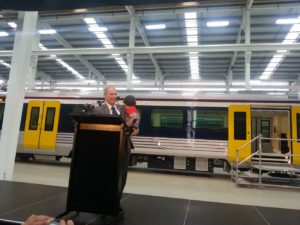 Mike Lee and City Vision are committed to building the City Rail Link to maximise the benefits the electric trains by providing a complete network and efficient, reliable service. 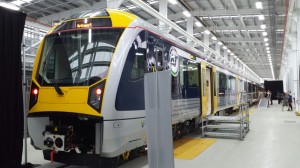