Media release: Final days to vote in election that will decide the future of Vector 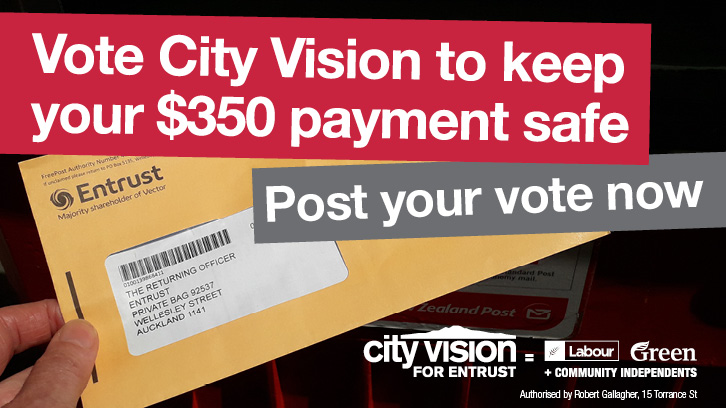 The five Entrust trustees will decide on whether the privatisation of Vector goes ahead and vote on a new chairman following the ousting of Michael Stiassny but the C&R (National and ACT) candidates have remained silent throughout the campaign even refusing media interviews. Voting documents now need to be posted to arrive by 5pm on election day Friday 26 October.

“C&R are relying on a low voter turnout to continue plans to privatise Vector. It is unacceptable that C&R has continued to spin the line that voting for them equals a $350 pay-out without fronting up throughout the whole campaign to explain their policies that actually put this annual payment at risk” says City Vision for Entrust team leader and former cabinet minister Peter Neilson.

“There is a current proposal confirmed by the Chair of Vector, the NBR, and The Australian that the UBS merchant bank wants to introduce a buyer to purchase the Vector’s Auckland electricity network. Privatisation would likely cut or eliminate the current $350 annual payment as under the Entrust trust deed it is the Auckland Council that has a claim on the proceeds from a sale of Vector not the recipients of the annual payment”.

While this has all been occurring the trustees have been fighting amongst themselves. One even taking another trustee to court and another one, has accused their Entrust Chair of “bullying” and of acting in an “unprofessional” manner when the long-term Chair of Vector Michael Stiassny was fired.

“Only the City Vision Team is standing on policies that will ensure Vector is not privatised and the annual payment is safe.  This has been the most bizarre election I have experienced, the C&R trustees seeking re-election refuse to be interviewed or debate their record and policy” “The only defence against such arrogance is to make sure more of us vote in the Entrust election so they get the message” says Mr Neilson.

All electricity account holders who received the $350 Entrust payment are eligible to vote. Voting papers should have arrived in the mail by last weekend.

Voting documents need to be posted to arrive in time by 5pm on Friday 26 October. Voting documents can be hand delivered to Independent Election Services Ltd, Level 2, 198 Federal Street, Auckland