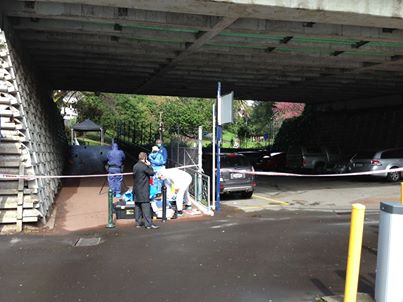 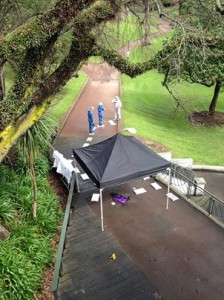 in Myers park. The death occurred in the area of the park that is central to the Board’s imminent plans to  upgrade the line of sight and visibility of the entranceway to Mayoral Drive; and improve lighting and security.

To the left of the crime scene the Waitemata Local Board’s new entranceway from Mayoral Drive and Queen Street will open up this whole area next year. The vegetation clearance began last month.

Auckland Transport are currently holding up the transfer of the Mayoral Drive underpass entranceway to the park where last night’s crime victim met his end, and which is one of the primary reasons giving rise to the sense of unsafeness on entering the park from Aotea Square. That impasse must end. It is frustrating and tragic that it may take a death to give renewed impetus to what should have happened two years ago after the Rugby World Cup, as our Board has been requesting all along.