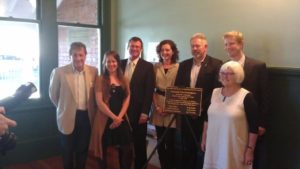 The City Vision-led Waitemata Local Board ensured that when NZTA handed over the beautifully restored Campbell Free Kindergarten building it would be put to community use.

The Kindergarten building was constructed in 1910 but had been vacant since the 1980’s. Fortunately the building was saved from demolition when the opportunity arose for the then Auckland City Council to partner with NZTA to refurbish the building at no cost to Council in exchange for lease of the land and part of the building for a 30 year period. NZTA now occupies the upper floors for equipment associated with the Victoria Park Tunnel.

The City Vision team on the Waitemata Local Board was determined to ensure that the ground floor would be available for community use rather than leased commericially as originally proposed.  We took the opportunity to hold an open day in conjunction with the official opening on 12 May 2012 to seek feedback on potential uses

The Board voted at its July  2013 meeting to lease the building to the Circability Trust.  The Trust works primarily with children, people with disabilities and people with experience of mental illness.  They propose to make the building a community hub for local children and families in a collaboration with Toi Ora Trust.