Exciting innovations in the Albert- Eden Local Board area 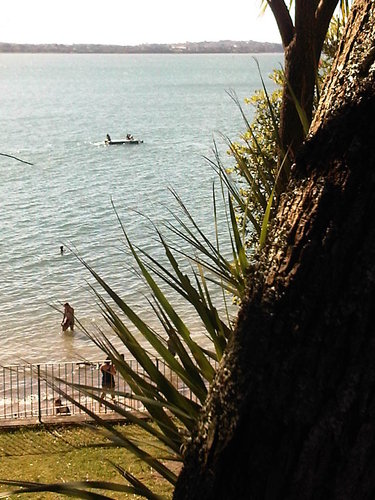 Margi Watson, Deputy Chair of the Albert Eden Local Board reports on three exciting innovations in the local board area.  Improving Community and Recreation Facilities is one of the Board’s key priorities as identified in the Local Board Plan.

Kuaka – our newest park is now open in Waterview

The SH20 motorway works started in Waterview in 2012. The Albert Eden Local Board pushed for better open space, environmental and community outcomes alongside the community, during the Board of Inquiry in 2011.

Kuaka Park is a direct result of that process.Expansion of the

former Saxon Reserve and the total redesign of the space was a consent condition. The Local Board also renamed the park to reflect the natural landscape in which it is located.It was officially opened by Margi Watson in December 2012 and the park has quickly become a magnet for the community to come together.

The opening day saw the community come together to celebrate its fantastic new park, with free refreshments and activities, including the

making of manu under the guidance of expert harakeke weavers.

Kuaka is the te reo name for the godwit and was suggested by manawhenua. Kuaka can be seen flying over or feeding on tidal mudflats in the area during the summer months. Kuaka were a valuable source of food for Maori. The Board supported this suggestion and the name was formally bestowed on the whenua at a dawn blessing.

The Pontoons Are Back at Pt Chev!

After an absence of 80 years – pontoons are back in the water at Point Chevalier.

The new pontoons were fully funded by the Albert Eden Local Board and went into the water in December 2012.

Margi Watson, Deputy Chair of the Albert Eden Local Board suggested the pontoons and says that “Getting the best out of our open space means making the most of what we’ve got – Coyle Park already has a great playground, the two pontoons will add some more fun to summer. The new pontoons are 21st century, similar to the 1920’s design but more durable. By comparison, a pontoon costs less than a playground to install – and can be used by a wide range on people including people keen to try out some swim training for fitness, recreational swimmers, older children, young people and adults. We hope the community enjoy them again as much as they did in the 1920’s!”

Making Every Park a Healthier Place

All parks and reserves in the Albert Eden Local Board have gone smokefree.

The Local Board signaled introducing smokefree parks and reserves, including all sportsfields, parks, walkways and playgrounds, in its Local Board Plan in 2011.

Although not regulated through bylaw, it is assumed that there will be strong community support for such an initiative. Recentresearch has shown that the majority of NZ’ers surveyed believed that smoking should be banned in all outdoor places that children are likely to go to.

The public announcement of the Albert Eden Local Board initiative was well received by the community with loud cheers and clappingat the official opening of Kuaka Park in December 2012.

We not only improve our parks by decreasing rubbish and promoting cleaner air but more importantly we are improving our communities’ health, decreasing exposure to second hand smoke for other park users and supporting positive and healthy role models for our children ” says Margi Watson, Deputy Chair of the Board.

If New Zealand is to become Smokefree by 2025 – we all need to play our part. Currently, Auckland’s regional parks have been smokefree since 2010, the former Waitakere and Manukau City Councils adopted smokefree policies in their local parks before the Auckland Council was formed, Auckland Zoo, Mt Smart and Eden Park stadiums are all smokefree. All Wellington’s park and reserves are smokefree too.