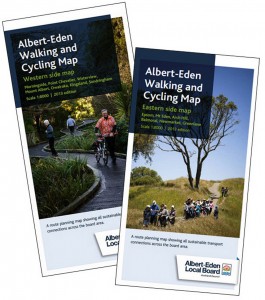 Comprehensive walking and cycling maps are now available for all parts of Albert-Eden, and some bordering suburbs. Board member Graeme Easte has been working on these maps for over two years and explains their purpose:

“These new maps are designed to help users plan their own route from wherever they are in the ward to wherever they want to be. Unlike traditional walking maps which highlight just a few key routes we show them all. And safe places to cross busy roads, public transport routes and community facilities.”

The cartographer was Igor Drecki who collaborated with Graeme on the Western Bays Walking Map in 2008. . The new map uses the same scale and symbols in the main but there were a few changes (e.g. post and phone boxes have been dropped but contours have been added).

After several months work compiling the draft maps they were extensively field checked for accuracy and clarity. This involved Graeme visiting almost every street and park in the ward – “in itself a hugely valuable update for me as a Local Board member on the state of our facilities”. For every day outdoors checking for steps, correct names for features, etc. there were hours spent documenting the required changes for Igor.

There are two double-sided maps – one for the West (Owairaka Subdivission and one for the East (Maungawhau Subdivision). They are available from local libraries, community centres and the Albert-Eden Local Board office at 135 Dominion Road.