Slowing down the rat-runners in Sandringham 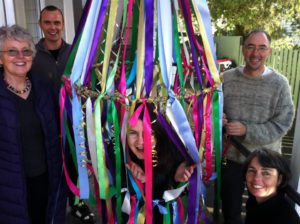 In Lambeth Road, every second car is over the speed limit, and Halesowen Ave, Calgary and Pine Streets are not far behind.  City Vision Local Board members have made sure that speeding in the through streets from Sandringham to Dominion Roads has been officially recognised by Auckland Transport, and steps are being taken to do something about it.

The entrances are going to be narrowed at both ends but in the meantime, I’ve been working with other  local residents to build and install giant dream-catchers which will shortly be installed – officially! – in Calgary Street. This is a part of an experiment to see if drivers will slow down if the residents make their presence felt more – known as ‘alternative traffic calming’.

Watch out for dream-catchers soon!

Another approach is being taken in Halesowen Ave, where local residents will be photographed for a series of billboards on the street – and more art is planned for Lambeth Road

The safe speed pledge is another way to give out the message “slow the speedsters in our streets!” Come along to the Sandringham Farmers’ Market  on July 13 and talk to Ben at the Auckland Transport tent and put a sticker on your car – or contact Helga ([email protected])