Voting in the Entrust Election 2018 is now underway 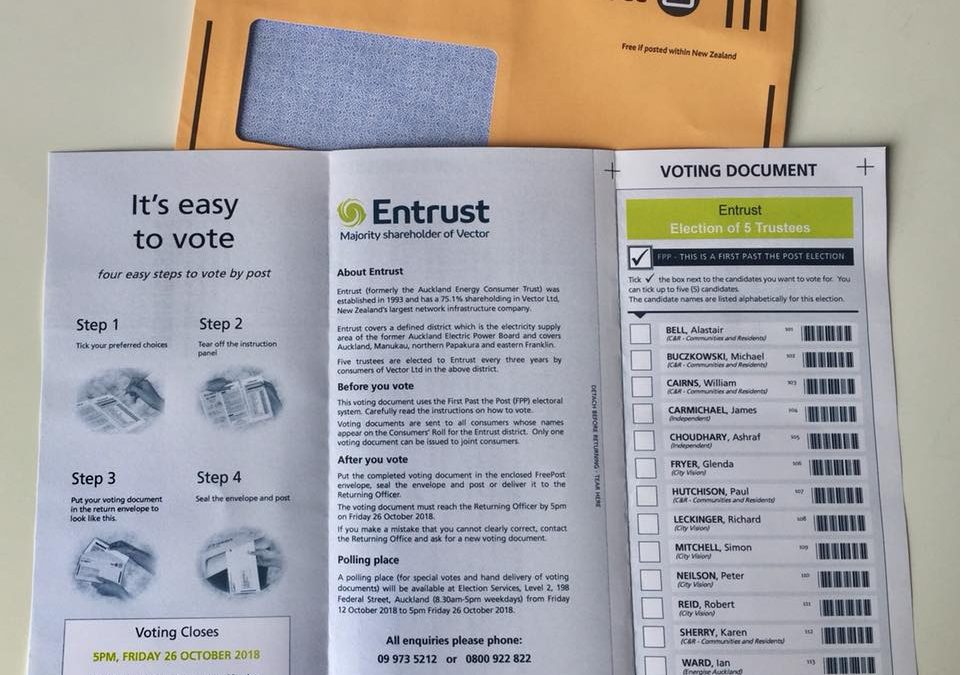 Voting is now underway in the Entrust Election 2018.  All electricity account holders in the area of the former Auckland Electric Power Board (Auckland, Manukau, northern Papakura and eastern Franklin) should have received voting documents by now.

Why you need to vote for a change.

The Entrust trustees are fighting amongst themselves, rather than working together to protect your annual dividend and improve the resilience of the electricity supply across Auckland.

Entrust is the old Auckland Energy Consumer Trust.  Entrust holds 75.1% of the shares in Vector (worth more than $2.1 billion) on behalf of the Vector customers living in the old Auckland Electric Power Board (AEPB) area. Entrust will pay a dividend of $350 to each power customer in the eligible area.  Every three years a postal election is held for the 5 Entrust trustees.   The current five Entrust trustees, all C&R are fighting amongst themselves, rather than working together to protect your annual $350 dividend and improve the resilience of the electricity supply across Auckland

The Chair of Entrust denies it, but the independent Chair of Vector Michael Stiassny who they recently dumped, says they plan to sell down the remaining 75.1% shareholding, Entrust holds in Vector. You will recall the previous National Government sold down the public shareholding in the electricity companies we owned to 51%. (more on privatisation here)

Back in 2014 two former National Party Presidents promoted a business sector proposal to sell the trust’s remaining shareholding in Vector and give the proceeds to Auckland Council which would mean no annual dividend would be paid to you or other beneficiaries.

Current trustees and directors have been dumped to enable a further sell down to occur in the next three years. One current trustee has gone to court to challenge another trustee’s eligibility, to serve on Entrust.

This infighting and lack of focus has to stop because the nature of the energy business is changing fast. Until recently a local electricity distribution (lines) business was considered to be a “natural monopoly” that everyone had to use as they sourced their electricity. That is now rapidly changing.

The storms back in April, left 183,00 Vector customers without power, some for more than a week. Entrust trustees in April were all seen to be missing in action. The Trust made no statement then or since about how they will use the trusts 75.1% ownership to press for a more reliable and resilient electricity supply for Auckland.  Undergrounding power lines and removing poles reduces the chances a falling tree will cut power in a storm. Climate scientists for some 20 years have advised us that major weather events like tropical storms and hurricanes will become more frequent. We need a plan for greater resilience and faster recovery in our city when major storms occur.

First the current trustees took the “consumer” out of the name of the Trust, then they took the “trust” out of Entrust.

It is time to dump the current trustees and vote for the City Vision team that will work together to maintain and protect your annual dividend.

Auckland needs a team at Entrust (formerly the Auckland Energy Consumer Trust) who are committed to working together to maintain and protect your annual dividend and the reliability of our electricity supply.

If elected we will:

We will seek independent advice on how to :

We will use that advice combined with regular consultation with and polling of our community, to build a shared vision of the future between Entrust trustees, Vector directors and our dividend recipients.

For full details of City Vision for Entrust policies

This positive plan can only be achieved if a majority of the City Vision Team of Glenda Fryer, Richard Leckinger, Simon Mitchell, Peter Neilson and Robert Reidare elected in October.

Have you tuned in to Auckland’s political soap opera of the year.